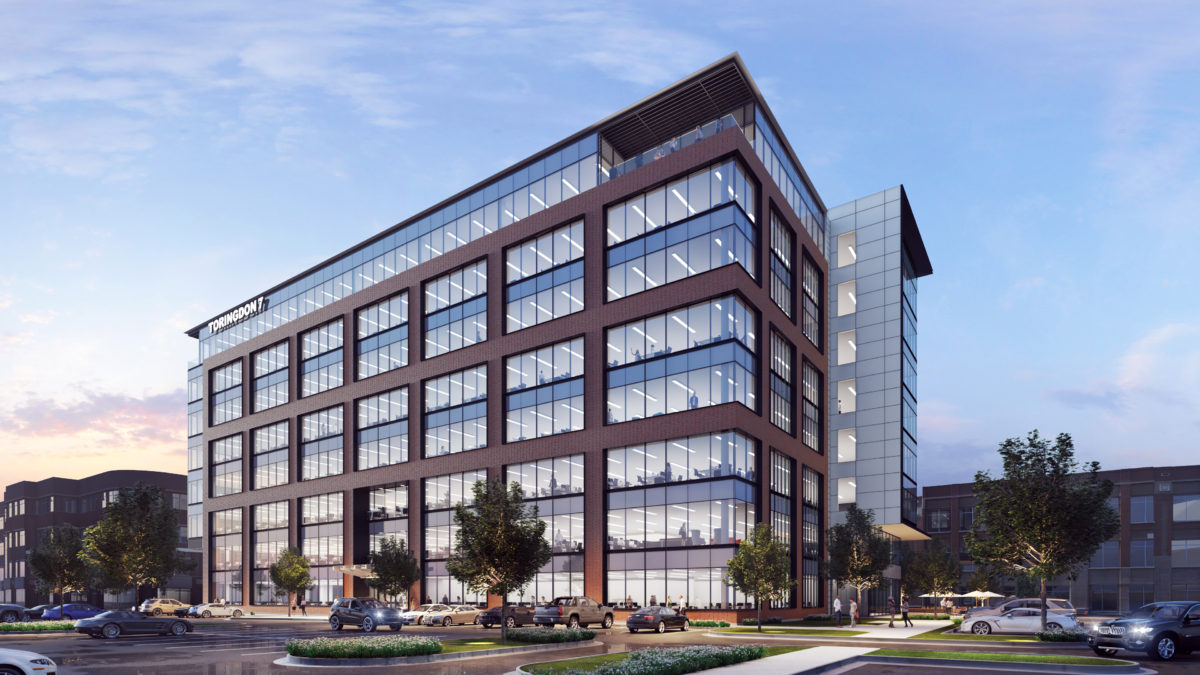 The eight-story, 198,195 SF building’s shell construction is scheduled for completion by summer 2019. Toringdon 7 features nearly column-free floorplans, floor-to-ceiling windows, and a four-per-thousand parking ratio, along with unmatched visibility from I-485 and Community House Road.

“Trinity Capital is excited to kick off another Class-A office project, especially one that completes our vision for Toringdon Office Park,” said Sherrie Chaffin, Director of Development at Trinity Capital.

Toringdon Office Park has been a part of Trinity Capital’s portfolio since 2012 when the firm acquired their first two assets in the park, Toringdon 3 and 5. After acquiring the remaining four buildings and bringing the entire park under single ownership, the firm invested in meaningful capital improvements including a full-service fitness center and pocket park, steadily increasing occupancy as the submarket’s popularity continued to grow.

“Toringdon is in one of Charlotte’s strongest submarkets due to its strong demographics, specifically as it relates to the number of decision makers located in the general area and the well-educated labor force,” said Walker Collier, Partner, Trinity Capital. “Trinity Capital is pleased to add to the park to satisfy the increasing tenant demand for infill, well-amenitized office space with walkable restaurants and living options. Developing Toringdon 7 is one of the final phases to the park that we started acquiring and repositioning in 2012.”

Trinity Partners is marketing Toringdon 7 for lease and is receiving strong demand based on the office park’s historical performance.

“After five years of working on Toringdon, we’ve watched this submarket continue to grow at a record pace,” noted Rhea Greene, Partner, Trinity Partners. “The existing six buildings have consistently outperformed the market, and continued interest in the park unquestionably supports Toringdon 7’s development. We anticipate making tenant announcements in the very near future.”

“Toringdon’s appeal, aside from the location, amenities, and building quality, is linked to a tenant’s ability to expand within the park,” said Jennifer Kurz, Director, Trinity Partners. “With the park at 95% occupancy, Toringdon 7 increases the opportunity for existing and potential tenants to grow their business in the heart of one of the city’s most attractive, amenitized and walkable office locations.”

Toringdon 7 was designed by Gensler. Brasfield & Gorrie is the project’s general contractor. D&A Wolverine is the civil engineer.

Trinity Capital Advisors focuses on the acquisition and development of institutional quality commercial real estate in the southeastern United States. The firm has invested more than $2.3 billion acquiring and developing more than 18 million square feet of the most successful workplace real estate projects in North Carolina, South Carolina, Tennessee, and Florida, including CBD office towers, industrial portfolios, suburban office parks, and mixed-use developments. Investments are capitalized through various Trinity Capital investment vehicles and partnerships with some of the country’s top institutional investors.