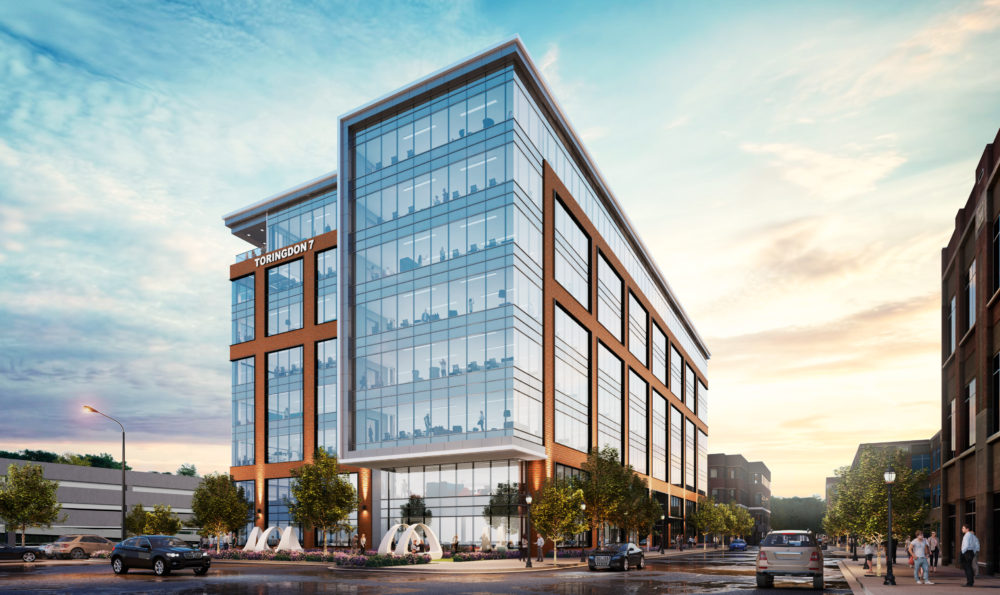 Toringdon 7 Development Tops Out, On Track for Summer 2019 Completion

Trinity Capital Advisors’ latest development, Toringdon 7 in Toringdon Office Park, has officially topped out, and remains on track for completion in summer 2019. “We’re pleased to reach such an important milestone, both for Toringdon 7 and for the Park,” noted Walker Collier, Partner at Trinity Capital. “Toringdon continues to benefit from the submarket’s growth, as more and more companies realize that our location, amenities, and access provide employees and clients everything they need.”

Toringdon 7 is the Park’s final building, and the largest and tallest in the park. Toringdon Office Park has been a part of Trinity Capital’s portfolio since 2012, when the firm acquired their first two assets in the park, Toringdon 4 and 6. After acquiring the remaining four buildings and bringing the entire park under single ownership, the firm invested in meaningful capital improvements including a full-service fitness center and pocket park, steadily increasing occupancy as the submarket’s popularity continues to grow.

The 200,000 SF, eight-story office building features nearly column-free floorplans, floor-to-ceiling windows, and a 4.25 per thousand parking ratio, along with excellent visibility from I-485 Johnston Road, and Community House Road. The Class-A building was designed by Gensler, with Brasfield & Gorrie as the project’s general contractor, and D&A Wolverine as the civil engineer.

“This is an exciting time for Trinity Capital, with close to 750,000 SF of Class-A office space under development,” said Chaffin. “It’s an honor to work with Brasfield & Gorrie in both Charlotte and Raleigh.”

Brasfield & Gorrie is working with Trinity Capital on Toringdon 7 and the additional three development projects in Raleigh. “We’ve been working with Trinity Capital for more than a decade and are honored to partner with them to complete their vision of the Toringdon Office Park development,” said Brasfield & Gorrie Division Manager Mike Foushee. “With the addition of the new office building and associated parking, this project is an important addition to both Toringdon Office Park and the Charlotte community and adds to our growing portfolio of work in the area.”

Toringdon 7’s first tenant will be Global Payment Systems, a leading worldwide provider of payment technology and software solutions. The company has signed a lease for 75,743 SF on floors six through eight in the building, leaving 122,452 SF of available space.