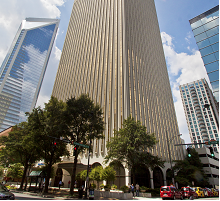 Downtown’s Third Ward will soon be home to one of Charlotte’s favorites. Rhino Market and Deli has signed a lease at 400 South Tryon.

The 2,900 SF space faces Church Street, and will serve as the second location for the popular local eatery. Construction begins in September and is slated for completion in early spring 2017.

“Downtown Charlotte is ready for a spot like Rhino,” noted Rob Rondelez, owner. “And the location, surrounded by both office and residential buildings, lets us serve a wide audience. We’re looking forward bringing great food and a fantastic wine and beer selection to Third Ward.” Rodney Faulkner with Legacy Commercial Real Estate represented Rhino in the transaction.

“Rhino is the perfect example of a true urban concept. You can go there for breakfast, lunch, happy hour, and everything in between. The Uptown retail landscape will benefit from their presence,” noted Adam Williams with Legacy Commercial Real Estate. He is responsible for leasing on behalf of 400 South Tryon’s owners, a joint venture between DRA Advisors and Trinity Capital Advisors.

400 South Tryon’s ownership plans building improvements to prepare for the new retail corridor along Church Street and Martin Luther King Boulevard, including converting the concrete sidewalk to brick pavers. Construction on the retail space begins in September, and Rhino will complete their space up-fit in early spring 2017. Plans include two nine-foot windows along Church Street that will open like garage doors, allowing for seating to overlook the streetscape. There will be additional areas for seating, a bar, and groceries.

This new retail announcement is the latest in a string of improvements for the downtown office building. Ownership recently completed a $2 million renovation of the front lobby and corridors and a full-floor pre-built office suite on the 8th floor. The building’s new tenant fitness center opened last fall. Currently, the building is 90% leased, offering two full floor availabilities on the 8th and 9th floors (37,656 SF total).

Trinity Capital Advisors focuses on the acquisition and development of institutional quality office, industrial, and mixed use real estate in the Southeastern United States. The firm has acquired or developed over 13 million SF totaling over $1.8 billion since inception. Trinity Capital has acquired or developed some of the most successful workplace real estate projects in the Southeast, including Perimeter Park, Ally Center, NASCAR Plaza, Perimeter Woods Business Park, Toringdon Office Park, and Westlake Business Park. Investments are capitalized through Trinity Capital’s Value Fund series as well as through partnerships with some of the country’s top institutional investors.