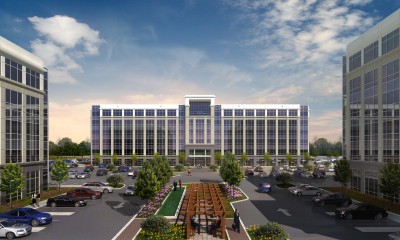 The leading global CRO initially signed a long-term lease for Perimeter Five, located at 3032 Carrington Mill Boulevard, for 214,450 GSF earlier this year. The building square footage has now grown to 263,901 GSF to accommodate INC’s growth following their recent merger with inVentiv Heath.
The original plan for the six-story building has been revised to expand the floorplates. The building is still expected to be ready for occupancy in 2018, and developers are excited to accommodate the company’s growth so seamlessly.

“We always enjoy helping our tenants grow, but this was a truly special opportunity for both INC and the ownership group,” said Jeff Sheehan, Partner at Trinity Capital Advisors. “Redesigning for a larger project on the fly created many unique challenges, but with a spirit of partnership anything is possible. Special kudos to our design and construction team, LS3P, Brasfield & Gorrie, and CCE, for their responsiveness and creativity. We also must acknowledge the wonderful staff and leadership at the Town of Morrisville for helping make this happen.”