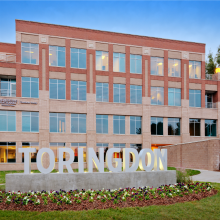 Walker Collier, a partner at Trinity Capital, declines to comment on AIG but confirms the Charlotte firm was asked to remain in the ownership group as an operating partner after the buyer was selected by Stockbridge.

The acquisition is expected to close as soon as this afternoon.

The Toringdon development on Johnston Road at Interstate 485 totals 519,602 square feet and is roughly 88% occupied

The Trinity Capital joint venture began investing in the formerly distressed park in 2012, completing its acquisition of the last two buildings in 2014. Prior to listing the park for sale, the owners had leased or renewed tenants for 85,000 square feet of space and recently added an open green space at the center of the park.